The models have been created by scientists, based on a large number of astronomical observations and other data. Basically, there are three methods of deriving a model of a minor body - Spacecraft imaging, Radar Imaging and Lightcurve Inversion.

Radar Imaging is among the most precise methods, but also quite difficult and expensive way of obtaining asteroid shape data. It requres a set of large radio telescopes (with antenna diameter up to 70 meters) working together to obtain "images" of an asteroid from different angles. And the asteroid's position has to be the one that allows the radiotelescope to see it. However, the results are impressive - radar imaging allows to create a surface model of an asteroid with great precision and study its size, shape, rotation state, surface features and to improve the calculation of asteroid's orbit as well. 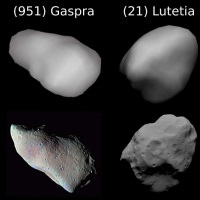 Lightcurve inversion is another method widely used to derive asteroid's shape, but rarely used for other types of bodies. It is based on a fact that asteroids shine by the reflected sunlight, and since the distance of an asteroid to the Sun and the Earth changes as the asteroid and the Earth orbit the Sun, the brightness of the asteroid changes as well. In addition, asteroids also exhibit brightness variations that are caused by their irregular shape and their rotation. This brightness variation is called a lightcurve. By measuring lightcurves, scientists can measure asteroid's rotation periods and derive a possible shape that would have produced such lightcurves.

Unfortunately, lightcurve inversion technique is not as precise as radar or spacecraft imaging and usually cannot predict all of the asteroid's surface features. In most cases, it can only create a convex shape, while the asteroids are mostly nonconvex. Still, it enables to reveal basic physical characteristics of individual asteroids.